You are here: Home1 / Building A Community 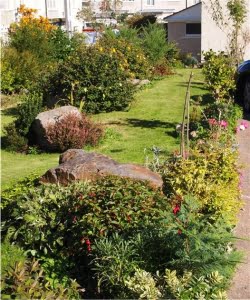 I met recently with Wendy who lives in Lansbury Park because I wanted to find out what was happening there and how it had been achieved.

Wendy and Phil had careers in teaching based in the Midlands. Having made a number of visits to Cardiff, they decided they would like to retire there. In the event, they chose Caerphilly, specifically Lansbury Park. When they moved in December 2010, they were surprised to find that the area was viewed as one of the most deprived in the whole of Wales.

It was evident that the infrastructure was not well maintained. Adjacent to their property was a large patch of overgrown weeds. Walkways and borders were not tended and graffiti abounded. Despite having a considerable amount of work to do to improve their new property, Wendy and Phil set about improving the environment.

They cut back the overgrown patch outside their property and found some large, feature boulders. With regular mowing, the weed patch became a lawn. Moreover, with imaginative use of cuttings, Wendy has introduced many plants to the area.

Unfortunately, we do not have a picture of how the patch looked before but the picture shows it transformed and maintained.

All this activity prompted interaction with the neighbours; the children enjoyed helping with the borders, dogs were kept under control, graffiti disappeared and neighbours that had particular needs were identified. In 2013, the Trevelyan Court Residents Group was formed with 6 people on the Committee and 12 active members.

They have been extremely successful, not just in improving the area, but getting recognition for their achievement:

The need for people to recognize the importance of the community in developing a strategy for the elderly in Wales was a key proposition in the meeting of the Forum with Rachel Lewis, the WAG secondee. Wendy and Phil explained how the development in their Court was starting to move to other areas.

Out And About This Summer Age Friendly Wales
Scroll to top