You are here: Home1 / Poetry Together

During a BBC news programme, our chairman saw an interview with Giles Brandreth who described a new initiative called “Poems Together”. The concept was to get schools across the UK to team up with a local Care Home and both learn some poems. The school would then host an afternoon tea during which both participants would recite the poems they had learned.

Given our close association with Lewis School, Pengam and their continued support for intergenerational ideas we thought they might be interested in this concept. They were and duly registered with the organisers and partnered with Trafalgar House Care Home in Nelson.

With some imaginative ideas, the original remit was expanded by the school. As well as the Care Home, they involved their intergen lunch club. And, as a “thank you” for getting the ball rolling they also invited our chairman to participate.

Everybody met in the school library in early September and rehearsed a total of 4 poems and had tea and cakes. A very pleasant afternoon. 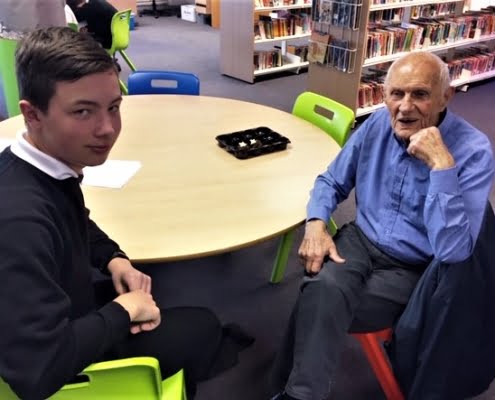 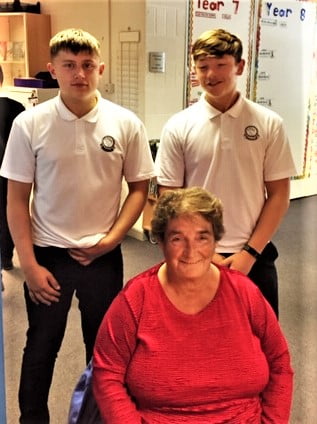 The Sunday Times ran an article about Poetry Together (13/10); “Ode meets young as thousands gather to hail poetry”. A cunning play on words; Ode/Old. It particularly mentioned Lewis School in the article. Leon is a member of the Lunch Club and originates from Poland. Kacsper Dudeck, a year 10 pupil, is also from Poland and they paired up to recite “The Soldier” in both languages.

In fact we had poems in English, Welsh and Polish recited by men and women representing all of those nations.

And we had thought it would end there. But it didn’t!!

The next part of the story is coming soon.