We have been able to trial the VR headgear and, subsequently, given the go-ahead for Tom Burmeister to purchase our own equipment.

At the beginning of August the Virtual Reality project really got underway with a visit by Committee member Mike Oliver and Tom Burmeister from PlayFrame, to the National Botanical Gardens in West Wales. They were invited there by David Hardy, Head of Marketing and Communications at the centre. Our ‘Team’ were given a guided tour by David, who generously gave up part of his very busy schedule to make sure that every aspect of the gardens was available to be filmed.

David said, “As soon as I heard of this project, I was keen for us to be involved. We are very proud of these gardens and have had over two and a half million visitors since opening. To think we can now reach those who can’t physically come here is very inspiring.”

Mike and Tom were guided through the Apothecary’s garden, Japanese garden, the Bee 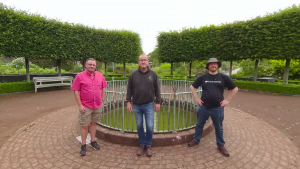 garden, as well as the largest single spanned glasshouse in the World. They were also introduced to the staff of the British Bird of Prey centre and were allowed to film the birds in action.

Mike was very impressed with the birds.  “I cannot thank Emma and Alex from the centre enough. It was a brilliant display of flying and also very educational. Tom (Burmeister) did get worried at one stage though when an Owl landed on his camera”. Don’t worry; no damage done!

PlayFrame are now in the process of editing and compiling the footage taken from the gardens.

Now we are generating our own films, we are in a position to take the VR equipment into our first care home.  In order to help us provide the service and quality we want, Trafalgar House care home in Nelson have agreed to be the first to have access to our project. Covid security and hygiene will be strictly adhered to, of course, and all precautions have been taken by PlayFrame and the care home. It is hoped that the feedback from the residents will be used to enhance the experience.